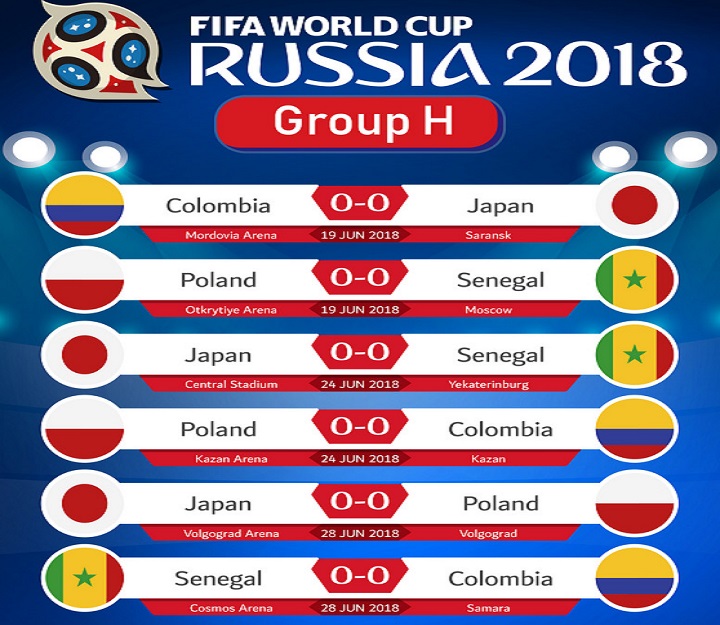 This is perhaps the most open group at the World Cup, and although Poland or Senegal are the top seed they will enter the tournament as second-favourites to top their group.

1.Columbia
Although this group is reasonably competitive, we think the odds are very generous for Columbia here and expect them to win all three matches. The South Americans topped a similar group in the 2014 tournament, which featured Greece, Ivory Coast and Japan who finished in that order.

Columbia are paying extremely generous odds here, and we are confident they will top the group with relative ease, meaning this is another good opportunity for a wager.

It’s hard to believe that this is just the second time Senegal have qualified for the World Cup. No one will ever forget their 1-0 win over reigning champions France in the 2002 tournament where they finished seventh overall. They have been placed in a group where they a definitely a chance; we are going to back them to be too strong for Japan and get a result against Poland to sneak into the second round.

This is perhaps the most open group at the World Cup, and although Poland or Senegal are the top seed they will enter the tournament as second-favourites to top their group. It’s easy to see why. Columbia will provide a stern test, Senegal is one of the better African qualifiers, while Japan is definitely the best from Asia. This truly global group will go down to the final round of fixtures. Poland did not qualify for the last two world cups, and have not made it out of their group since 1986. While their squad is noticeably better these days, their FIFA ranking is noticeably inflated. We are going to make a big call here and predict that they will make a shock group-stage exit.

Japan’s ranking of 55th simply makes no sense. They appeared in the stronger of the two AFC qualifying groups and finished at the summit, yet are ranked behind Australia and Saudi Arabia who shared the pool. Regardless, we don’t expect them to make it out of this group.