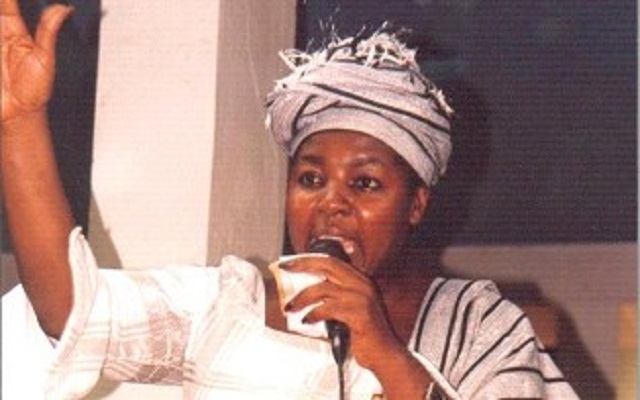 Name: Sarpong
Other Names: Cherita
Date of Birth: 1956-02-05
Place: Accra-Ghana
Detailed Biography
She attended the Mfantsiman Girls’ Secondary School in Saltpond for her secondary education and the Kumasi Polytechnic, where she obtained a Diploma in Business Studies.

She obtained further education at the Washington School for Secretaries, the Montgomery Community College and the Notre Dame University, all in the US.

According to her curriculum vitae (CV), she is also a former National Organiser of the 31st December Women’s Movement and one of the initial five people who developed the concept for the formation of the movement.

Ms Sarpong has worked with Working Mothers Incorporated, an employment agency for domestic care in the US. While there, she was in charge of the daily interviewing of clients and customers and the placement of advertisements, among other things.

She has also worked with Optimum Care Agency, a nursing care agency which provides permanent and temporary workers for nursing homes, hospitals and private homes and the University of Maryland Early Childhood Department, where she helped to develop a curriculum that gives undergraduate students credit for babysitting which is done as part of their course work. She was the originator of that programme and worked in collaboration with others to implement it. The programme still runs today in the US.

Ms Sarpong, while in the US, was also an active volunteer in the Obama 2008 Campaign and embarked on a “Get-out-to-vote” campaign in South Carolina and a “door-to-door” in Virginia. She gave out her house to be used as campaign office on the last leg of the campaign.

In Ghana, she established the Caring Kids International, a local non-governmental organisation which assists children and the youth in education, and Youth in Excellence Service for Mother Ghana (YES), a volunteer youth corps that organises the youth to adopt schools and form reading clubs. This programme was adopted by the then Minister of State in charge of Education, Ms Christine Churcher, to assist children to read.

YES took her across the length and breadth of the country to organise nation-wide reading programmes, donate books and computers to basic and secondary schools. Tens of thousands of books were distributed through the programme.

Through YES, she also provided financial support for the Dormaa Ahenkro students in the University of Ghana, Legon, in 2000. This was at a time when student loans had delayed and there was agitation among students on the campus. In return for her financial support, the students organised reading clubs in more than 200 primary schools and JSSs in the entire Dormaa District. As a result, the school children in the district performed creditably and that resulted in an increased enrolment in senior high schools in the district. She funded all those programmes from her own resources.

She has also sponsored and organised excellence and abstinence clubs in some senior high schools in the country to remind students to make the most of their time while in school and stay away from sex and other social vices.

Ms Sarpong also provided exercise books for distribution in the entire Kadjebi District in the Volta Region and established a center for excellence for the youth. The centre, which was inaugurated by former President J.A. Kufuor, organised workshops to educate teachers on new teaching techniques. This was done in collaboration with a renowned teacher from England who had been recognised by Queen Elizabeth II of Britain for her contribution to teaching in England.

In response to the plastic menace, she launched a pilot programme dubbed “Cleaning Ghana for Computers” a programme which prodded children to cultivate the habit of cleaning the environment and disposing of waste plastics and cans properly. Computers and educational tools were procured for the schools of children who complied.

Ms Sarpong, a mother of three, has also sponsored and organised excellence and abstinence clubs in some senior high schools in the country to remind students to make the most of their time while in school and stay away from sex and other social vices.

She also organised the first youth parliament in Ghana, a concept later adopted by the National Youth Council (NYC), and also established the Human Potential Community College, a school that admits JHS graduates, regardless of their grades in the BECE.

Ms Sarpong has won 10 awards for her contribution to Ghana’s development, which include the West African Students Award (WASU). She was also acclaimed “Mother Ghana” by the National Union of Ghana Students during the ECOWAS Peace Summit in 2004.