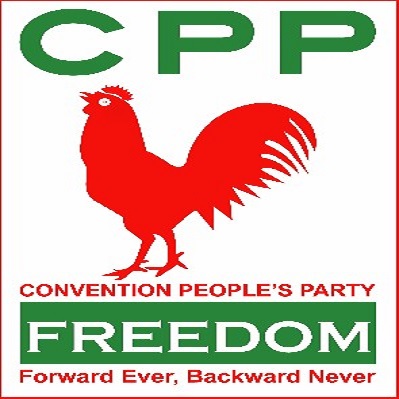 The Convention Peoples' Party (CPP) was formed in 1949 during the struggle
for independence. Its founding father was Osagyefo Dr. Kwame Nkrumah Ghana's
first president.

It was the first party to rule Ghana after independence. The CPP started as a
vehicle of emancipation of the nation and the whole of Africa. It sees itself as
a mass party that embraces farmers, fishermen, the rural folks, the rich and the
poor alike.

It is a party within which there are no distinctions and believes that all
citizens must be seen as Ghanaians first. The party says it is committed to the
freedom and dignity of the African everywhere, and committed to the process of
independence.

The CPP is also committed to social justice and of the conviction that "you
cannot have a nation that is half marginalised and half affluent". The party
believes that the state must ensure that all people are given equal opportunity
to develop themselves before any tribal considerations. It also holds the view
that the state must be committed to solidarity in the poor.

The CPP is committed to the ideas and ideals of the late Dr. Kwame Nkrumah
and hold the belief that those ideals are still relevant to the youth of today.
It is in the light of this that the party wants to come back to power in order
to continue the unfinished business of Dr. Kwame Nkrumah. The CPP has not seen
political power for a rather long time now. It however believes that this is the
time for the party to come back to rule this country.

CPP's colors are white, red and green. Its symbol is a cock and its motto is
"Save Ghana now".