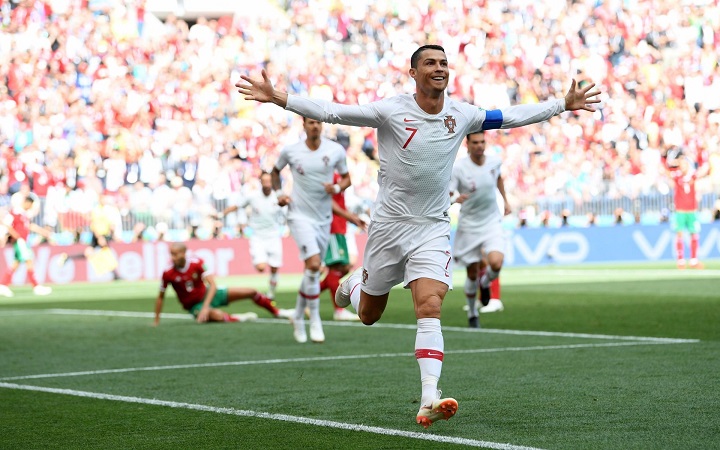 They do call Portugal a one-man team and when that one man is Cristiano Ronaldo, a footballer so famous that even the Russians would not need to see his passport, you can understand why the World Cup finals has fallen under his spell.

Without Ronaldo, there would be none of the four goals registered by Portugal in this tournament including the winner against Morocco, which has taken his overall tally to 85, the most scored in international football by a European footballer. Without Ronaldo this would be a mediocre team, rather than a mediocre team with a first-class goalscorer who barely has to flash a glance at the camera to get himself voted the sponsors’ man of the match.

Yet Portugal are a bit more than that. They also encompass Pepe, Ronaldo’s erstwhile Real Madrid team-mate, who slumped to the ground in agony when Menat Benatia tapped him on the shoulder, and also launched himself like a bowling ball at the Morocco defenders who were trying to block the corner from which Portugal scored. Portugal, are also the goalkeeper Rui Patricio, on his way to Wolverhampton Wanderers, whose fine save in the second half from Younes Belhandia preserved his team’s lead.

But mostly Portugal are a team happy to defend whatever margin Ronaldo’s opportunism affords them, a side that will only relinquish a lead if their fingers are prised off one by one. Even their usually unrepentant coach Fernando Santos admitted this was an unambitious performance and affected dismay that his players should back off Morocco for most of the 86 minutes after Ronaldo’s goal - although that seems to be the usual gameplan.

From Morocco, the first team eliminated from Russia 2018, there was everything but a goal. Their white-shirted, lantern-jawed French coach Herve Renard, who watches from the touchline like a Monaco divorcee scrutinising the dance-floor, listed all the things he was proud of afterwards and lamented the performance of the American referee. Mark Geiger, he intimated, had failed to see Pepe launch himself at the two Moroccans before the goal.

There were some fine performances including Karim Elahmadi, once of Aston Villa, and also from Morocco’s most talented player, Hakim Ziyach. It was Belhandia, a No 10 whose header Patricio pushed round the post. Then there was Amrabat on the right who unwisely discarded his protective headwear following a concussion against Iran five days earlier. “He’s a warrior,” said Renard, with little thought given to the Fifa protocols.

It seems unlikely that Portugal will repeat their success at Euro 2016 playing like this and even Ronaldo, speaking on receipt of his second man of the match award, did not raise the prospect. “The most important thing was to win the game to get the three points,” he said. “We knew because if we lost we could have been out so we knew Morocco would try hard. They surprised us at the start with a lot of attacks, but I managed to get the goal.”

He is currently the tournament’s leading goalscorer with four, which is one fewer than Just Fontaine had after two games when he set the record for a single World Cup at 13 in 1958. If Ronaldo’s free-kicks continue to be as bad as they were on this occasion then Portugal’s No 7 will not be getting anywhere close. He blasted a couple straight at the wall and spent long periods of the game watching the action from a long way up the pitch.

His Real Madrid team-mate, the 19-year-old Achraf Hakimi, was another player on the front foot who Ronaldo got little out of when he switched over to the right wing. Santos said that his side had failed to take control of the match. “I have high quality players and there was no intensity in the game. We have player who have really good technical capability … but as happened against Spain, after 10-15 minutes my team couldn’t have the ball and couldn’t play. There was pressure but that is normal.”

They were saved by some poor finishing from Morocco, including the Roma defender Mehdi Benatia who had a couple of second half chances having been booked before the break for his remorseless pursuit of Ronaldo. The Morocco captain seemed unable to forgive himself for losing track of the No 7 for the goal. It came from Joao Moutinho’s corner, Pepe took out half the defence and Elahmadi just waved a boot at it while Ronaldo stuck his head in.

Renard’s options for changes in attack were limited. Once it became clear that there was no breakthrough likely from striker Khalid Bouatib, who plays for Yeni Malatyaspor in the Turkish Super Lig, he was replaced by Ayoub Elkaabi, the only outfield player in the squad who still plays club football in Morocco. “There’s a thing I am sure of,” Renard said, “that the Morocco people will be very proud of its team. Two and a half years ago we went on an adventure. We were 81st in the world, now we are 41st.

“We have qualified for a World Cup finals for the first time in 20 years and we have shown that we can play football. It’s true that we weren’t very effective in the end but I would like to have a good look at the corner from which Portugal scored.”

The Moroccan people will also surely wonder why a talented set of players could not manage a goal against either Iran, or a side which, despite being European champions managed less possession over the course of the game and two fewer attempts on goal. Portugal have Ronaldo’s goals and a cussedness in defending a lead, but they are a long way from being Russia 2018’s most daunting side.