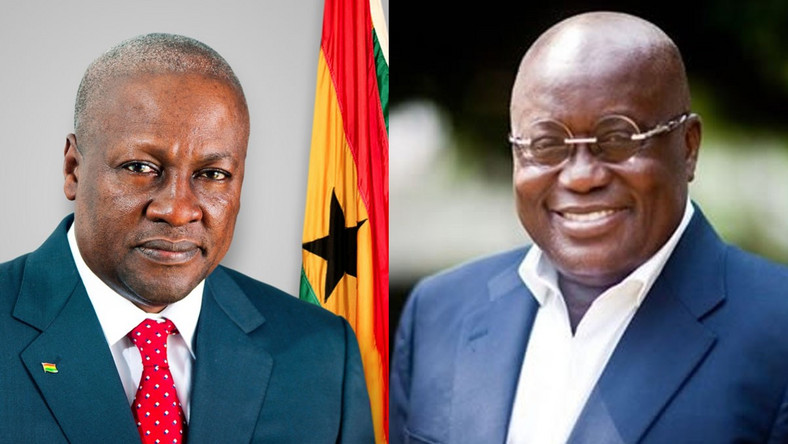 According to GhanaSky.com analyst through Columnist Rodney's Potpourri, Ghana's economy, education, health, employment, security and a host of other indicators will determine Ghana election 2020.

Therefore, the citizens of Ghana, must demand from NPP or NDC what they did during their four-year tenure.

So, that would help us to decide between ‘Nana Addo, Toaso’ (continue) and ‘JM, Sanbra’ (come back)

Over the weekend, former President John Mahama (JM) simply drowned his opponents in a political tsunami during the National Democratic Congress (NDC’s) presidential primaries, leaving them flailing and gasping for precious oxygen.

Of course, any casual observer of the primary’ campaign knew what was coming, including, I am sure, his opponents.

Perhaps their only hope was that the inevitable blow would be merciful and delivered in a velvet glove. But the party spoke emphatically with an iron fist devoid of the niceties of even a flimsy paper glove.

Truth be told, the NDC really had no choice other than JM because he was their most visible and best-known candidate.

Some argue that it is likely the NDC will lose the 2020 election and that the party will struggle to win 2024 with a new face.

After all, since 1992, every incumbent party has enjoyed no less than two terms, and no fresh opposition candidate has ever won the presidency in a first attempt.

But, I am sure the general thinking in the party, quite understandably, is that there is always a first time, that JM is their best shot for now, and that should they get to that bridge in 2024, they will cross it.

The fact that constitutionally, he would only be eligible to serve one term if he wins the 2020 election, seemed to be far away from the minds of the over 213,000 delegates who donated their thumbprints to him last Saturday.

I believe Election 2020 promises to be an exciting campaign, akin to a ‘Thriller in Manilla’ or ‘Rumble in the Jungle’ affair, to borrow from the screaming media headlines of the frenzied boxing heyday of Mohammed Ali, Joe Frazer, George Foreman et al.

We will, for the first time in our electoral history, be witnessing a presidential election battle between a former and an incumbent president.

It couldn’t get juicier than this. The former president is not amused over the fact that he lost his job. Now he wants it back.

And I do not blame him for wanting to be our first Comeback President.

After all, he holds the unenviable record of being the first incumbent President in this country to lose a re-election bid, and by such an embarrassingly huge margin.

Among others, he must want to wipe that ugly blot off his otherwise star-studded political CV which saw him rise from MP through to Deputy Minister, Minister, Vice President and then finally President. And so, he will go into the election with all that he can muster.

Indeed, I believe the Election 2020 campaign has just begun-that is, if it did not begin on January 7, 2017 right after the inauguration of President Nana Addo Dankwa Akufo-Addo.

Cynics argue that this country is in a perpetual campaign mode because every decision or step by government and opposition is directed at the next general election.

I am excited about the 2020 campaign for the simple reason that neither candidate can make lofty promises to us without a reference point-that reference point being their own four-year records as President of this country.

On the economy, education, health, employment, security and a host of other indicators, we, the citizens, must demand of them what they did during their four-year tenure.

That would help us to decide between ‘Nana Addo, Toaso’ (continue) and ‘JM, Sanbra’ (come back). Simple.

Of course, there will be some for whom an issue-based campaign is an anathema.

They would prefer to wallow in the cesspit of dirty, ugly ethnocentric politics and divisiveness, pitching one ethnic group against the other.

Others would find refuge in distributing money and all manner of cheap items in a squalid to clinch the election.

It will be naïve to pretend that this will not occur, or that it will not make some impact on the electoral outcome. But we can, and must, rise above ‘Moneycracy’ and ‘Ethnocracy’.

The 2020 clash must be of ideas and records, not of ethnicity or money.

Or come to think of it, of macho men, boots, guns or slaps.

We have a nation to build.