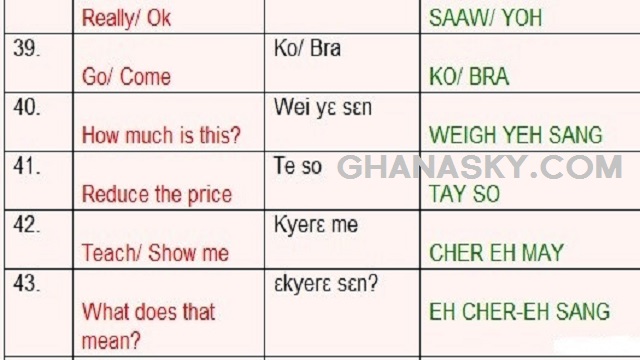 The ideas, customs, and social behaviour of a particular Akan-Twi people in a society.
Misers – Pεpεe (a person who hoards wealth and spends as little money as possible)
Oboכּba is normaly referred to Kwahu people who speak a dialect of Akan language called Twi and live specifically
in the mountainous Eastern Region of Ghana in the towns such as Abene, Abetifi,
Pepease, Atibie, Nkwatia, Obo, Bepong, Tafo, Akwasiho, Obomeng, Twenedurase, Nteso,
Mpraeso, Asakraka, Aduamoa, Pitiko, Sadan, Burukuwa, Nkantanane, Ahinasie and Donkorkrom.
Macmillan and Kwamena Poh (1965) described the wonderful climate of their mountainous town,
Abetifi as “…the Switzerland of West Africa, with nights as cool as Many nights in Europe”.

Examples of Taboos – Eyirwodea
1. The Akan-Twi people have a notion that one should not shout on top of one’s voice
when mentioning somebody’s name in the night. It is believed that ghosts and
other spirits might hear the name and can spiritually manipulate them. The
moral lesson is actually to stop people from making noise or cause
unnecessary distraction in the night

2. It is also believed that, one should not sing whiles bathing. It is said
that one who fall prey to this act will die. The prime aim was to prevent
lather and other chemicals from entering one’s mouth while bathing.