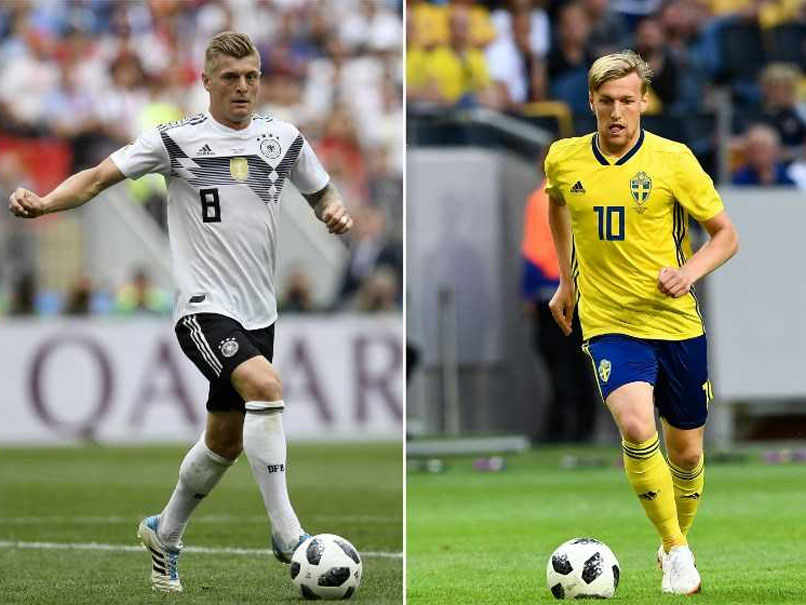 There were just 18 seconds between Germany’s fate at this World Cup being taken out of their hands and Toni Kroos scoring from a dramatic free-kick to complete an extraordinary comeback and turn the group on its head.

Just 18 seconds between Germany facing the very real prospect of exiting a World Cup at the first hurdle for the first time in 80 years and dealing the cruelest of blows to an impressive Sweden side who were left to nurse a sense of injustice on a spellbinding night in Sochi.

Just 18 seconds between Joachim Low fearing the curse of recent world champions might soon extend to his side and the German bench sparking fury among their Swedish counterparts by celebrating wildly on the touchline.

As if defeat was not bad enough for Janne Andersson, the Sweden coach, the sight of Low’s staff milking the moment was as hard to take as the stonewall penalty his team had been denied in the first half. “Some of the German bench celebrated by running in our direction and rubbing it into our faces by making gestures and that really got me annoyed,” Andersson said. “We fight it out for 95 minutes and then you shake it out and leave so I was very angry about that. This is probably the most crushing end to a game I have experienced in my career.”

The clock read 94.42 when Sweden’s players dropped to their knees after watching Kroos, who had been at fault for the opening goal, bend a breath-taking shot into the top corner after exchanging a short free-kick with Marco Reus. A draw would have left Germany’s fate in the hands of Sweden and Mexico in the final round of fixtures. Instead, they can guarantee their progress to the last 16 when they face South Korea in Kazan on Wednesday by bettering Sweden's result against Mexico. For 45 minutes, Germany had been desperate, second best to a Sweden team who were sharper, faster and hungrier.

Only ref Szymon Marciniak and the video assistant referee will know why Jerome Boateng, sent off eight minutes from time for a second booking, was not penalised for bundling over Marcus Berg in the 12th minute but, even discounting that misfortune, Sweden carved enough good chances to have scored three by half-time. Yet there was always the feeling that those misses, and the penalty controversy, could come back to haunt the Swedes and so it would prove.

Reus needed just three minutes of the second half to cancel out Ola Toivonen’s sublime opener and German pressure would become more and more pronounced. Reus should have scored a second from Joshua Kimmich’s cross on the hour then Robin Olsen tipped Mario Gomez’s bullet header over the bar before Julian Brandt crashed a shot against a post in stoppage time.

Most inside the stadium must have thought Germany’s chance had gone there and then but there is a good reason why the country have reached at least the semi-final stage of 21 of the past 27 World Cups and European Championships. They simply never know when they are beaten.

“Something that I did appreciate was that we didn’t lose our nerve, didn’t break out in panic after going behind,” said Low, who tried to play down the provocative celebrations. “I appreciated the spirit of the team, we never lost hope. I didn’t witness any gestures because after the final whistle we were really involved and we fell into each other’s arms elated rally.”

It was a riveting game. Breathless, controversial, dramatic. The first half alone would be worthy of a study on how to perfectly execute a counter- attacking game plan against opponents who seek to monopolise possession. Defensive strategists the world over will have marvelled at the way Sweden soaked up German pressure and then pounced on their mistakes with rapid raids on the transition. They were as controlled and compact as those spaces left by Germany were alarming.

Germany may have won it but South Korea will watch this, and the Mexico game, and know the world champions can be got at. Similarly, if Low’s team do advance they are unlikely to induce the fear they once did among opponents. There are clear weaknesses to exploit, not least their sluggishness dealing with sides who transition so quickly when they win the ball.

“My team said it was a clear penalty,” Andersson bristled.

After only 15 minutes Sweden had made 19 passes to the world champions’ 169 but the only statistic that mattered in the opening period was the one that read Sweden 1 Germany 0. And what a goal it was. From the tireless Berg intercepting a pass from Kroos to the probing Viktor Claesson stroking a clever cross into Toivonen to the Toulouse forward cushioning the ball on his chest and holding off Antonio Rudiger to delicately lift the ball over Manuel Neuer, it was a masterclass in how to strike hard and fast.

They had other chances, too. Berg drew a stunning save from Neuer with a header from Seb Larsson’s free-kick and Claesson, otherwise brilliant, made the mistake of not shooting first time from Emil Forsberg’s fine cross, electing instead to cut inside Jonas Hector only to be tackled. You sensed it could all come back to bite Sweden, even when Boateng was dismissed, and it did in the most heartbreaking fashion. What a game. What a night.