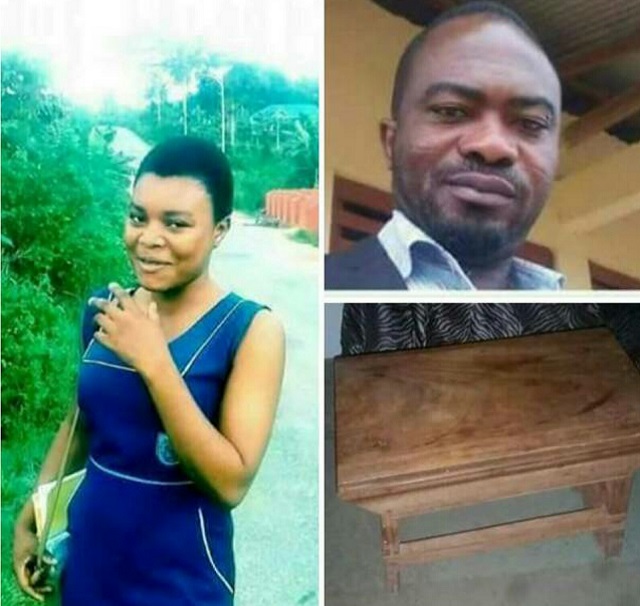 Madam Diana Krofie, wife of Mr. Robert Seppey, the Head teacher of Breman Adumanu in the Asikuma Odoben Brakwa District of the Central Region involved in a viral video has finally commented on the matter.

Speaking in an interview with Accra-based United Television and monitored by YEN, the wife of the head teacher pleaded with authorities to temper justice with mercy and leave the matter be.

The young wife of the headmaster revealed that she was unemployed and had two children with her husband who was now nowhere to be found. She added that she could not reach him through any means.

Madam Diana Krofie added that due to her unemployment status, she could not cater for her daughter and son.

She went ahead to plead with the authorities to let go of the matter and reinstate her husband so he could cater for their family.

She went on to send a passionate appeal to all Ghanaians who were in possession of the infamous video to kindly delete it from whichever device they had it on so as to save her husband’s reputation.

Nana Asare Bediako II, the chief of Breman Adumanu in the Central Region also pleaded with educationists in the area to stay away from all forms of immoral relationships with their students.

He said they were making strides to ensure that these immoral practices were eradicated from the society.

The matter is currently under investigation by a two-member committee set up by the Ghana Education Service (GES).

As of now, the head teacher, even though not at post is believed to be holding unto his job contrary to reports that he had been sacked for his act with the student.

Shockingly, the female student who was involved in the act has opened up on her relationship with the headmaster and has claimed that the two of them were dating.

Watch Wife of Headmaster Video Below: