Guinea Bissau vs Ghana [0:2] – All Goals and Highlights at AFCON 2019, Ghana down Guinea Bissau to top Group F [Watch Video] 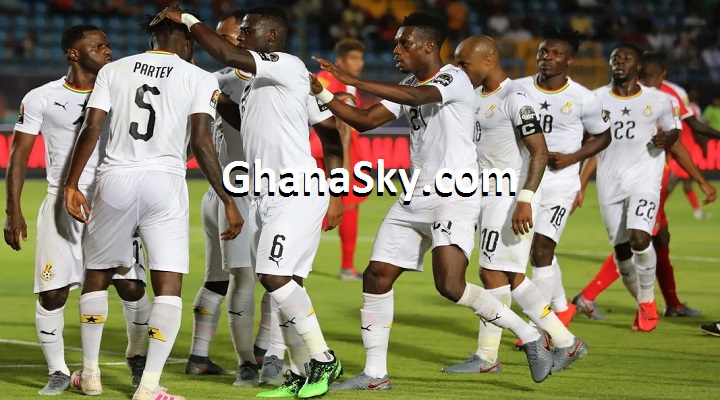 Second half strikes from Jordan Ayew and Thomas Partey handed Ghana a 2-0 win over Guinea Bissau in their Group F Day Three match on Tuesday in Suez and a place at the knockout stage of the Total Africa Cup of Nations Egypt 2019.

The win, Ghana's first at the campaign, saw them finish top of the group after Cameroon and Benin played out a barren draw in the other simultaneous kick-off in Ismailia.

Holders Cameroon, who finish second also on five points as Ghana join the latter at the round of 16. Benin are third on three points and remain in the hunt for one of the four best third place teams set for a place at the knockout stage.

The first half was characterized by few chances from either side as both sides deployed a cautious approach. Both needed to win to be certain of a place at the next round but failed to break the deadlock in the first half.

Back from recess, Ghana broke the deadlock just a minute into the second half courtesy Ayew, with a curling shot that left Guinea Bissau goalie Jonas Mendes with no option.

The opener saw the Black Stars took control of the game dictating the pace as Djurtus as the Guineans are nicknamed laboured in search of their feet.

Three minutes past the hour mark, Ghana goalie Richard Ofori was to his side's rescue with a superb save to deny Guinea Bissau captain Muhammad Cande, who unleashed a curler from a free-kick at the edge of the penalty area.

Ayew found Baba on the left, who cut in and Partey tapped home from close range to put them on the path of victory.

The younger Ayew nearly capped his day with the second but his effort hit the upright on 78 minutes despite Mendes beaten.

Ghana held on to victory to maintain their enviable record of going past the group stage at every edition since 2008.