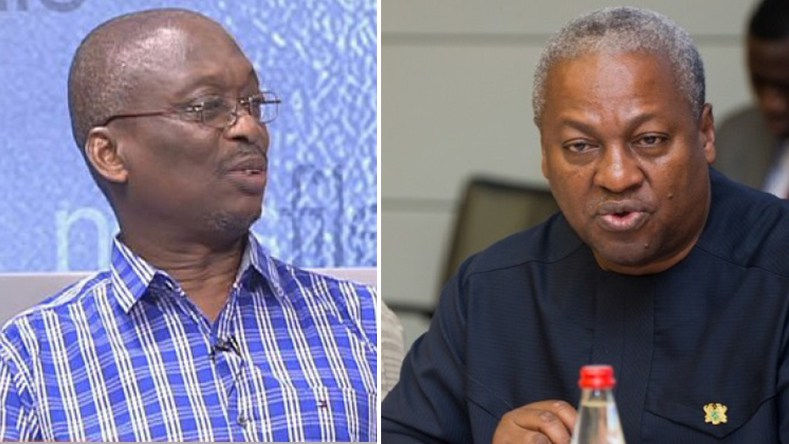 Editor in Chief of the New Crusading Guide Newspaper, Abdul Malik Kweku Baako Jnr. believes former President John Mahama has lost focus in his campaign to become the flagbearer of the opposition National Democratic Congress (NDC) going into the 2020 election.

He said although Mahama’s chances of winning the flagbearer position is very high, his victory will be jeopardized if he pays little attention to delegates and recommendations of the Kwesi Botchwey Report.

Former President John Dramani Mahama, who is on a campaign tour across the country to reclaim the NDC ticket for the 2020 election, has accused government of poor economic management.

Earlier, he had promised not to insult his opponents during his campaign.

But speaking on Joy FM’s News File, Mr. Baako said Mahama’s constant critique of the government may cause him more harm than good if he neglects some vital components of the NDC.

“He will win hands down. I will be shocked if he loses this thing.

Their focus should be on delegates and perhaps the Kwesi Botchwey report because they know the content.

Something went wrong with the party machinery in terms of election 2016; so that should be the focus. If not, his campaign will suffer premature ejaculation before he wins the primary.”

Abdul Malik Kweku Baako further mentioned that although Mr. Mahama’s criticisms are quite understandable due to his position as former President, his utterances may later be used against him.

“He will win the primaries alright, he will become the flagbearer, but that time I am sure perhaps the campaign would have been degassed.

He would have been modeled so badly and I am not talking of insults.

I am talking about people checkmating him on the things he’s spoken out there and debasing them using facts.

So, I am surprised there is a little bit of lack of focus”, he stressed.

“Some of them have decided to stretch the scope by talking to school children and everybody and launching national issues.

In Mr. Mahama’s case, because of who he’s been before, he is launching national issues because none of his competitors really have the same level of class.

He’s launched national issues so he is being contested by his opponents; not just the internal opponents, but the external opponents are already dealing with him on all those issues.”

Vice President, Dr. Mahamadu Bawumia, has said it will be suicidal for Ghanaians to hand over the administration of the country back to former President, John Dramani Mahama.

Dr. Bawumia indicated that the living conditions of Ghanaians will be worse off if John Mahama and the NDC return to office.

Former President John Mahama has said that the current economic challenges being faced by the country can best be resolved by experienced persons and not ‘economics lecturers’ who merely engage in theories.

He said experienced persons will better understand the situation and manage it in a way that will bring about stability rather than “economic lecturers who are just theorists.”

“…that is what economics lecturers who are just theorists can come and lecture but they don’t understand that the practicals of running governments is completely different. NDC has done it before, at any time that NDC has been in government, this country has made progress,” he said.

John Mahama further indicated that following what he described as the poor performance of the NPP government in the last 21 months, Ghanaians are ready to give the NDC another chance.