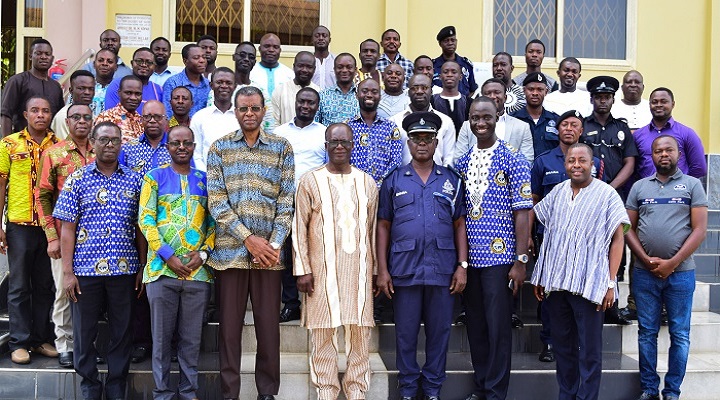 In his opening address, the Resident Minister, Pastor Charles Nyarko, stated that the increase in crime rate and insecurity in the municipality in recent times have reached worrying limits. He said that the event was organised to enable the Church to engage the security officials in order to pray for the Police Service for divine intervention.

“Leadership of the Church are of the view that only effectual fervent prayers of the people of God would confront these vices,” he said.

Chief Supt. Robert Kobil and a delegation of security personnel from the Tarkwa Divisional Command, who attended the event, were used as a point of contact to pray for Police Service in general and the state of security in the nation.

Apostle Samuel Yaw Antwi, the Tarkwa Area Head, who chaired the meeting, admonished and encouraged the Ghana Police Service to keep working hard despite the attacks against them and the many glaring challenges they face. He assured them that the Church would continue to offer spiritual and physical support to them as they endeavour to maintain security in the country.

He, however, charged the Police Service not to sit on the fence in the fight against the menace and evil of Galamsey (illegal mining), which the Tarkwa Area Head stressed, is also a security threat.

The Vice-Chancellor of the University of Mines and Technology (UMaT), Prof. J.S.Y Kumah, who led the devotions at the meeting with many Bible texts (like Acts 17:26; Psalm 139:16; Psalm 25:14; Psalm 30:15-16; Deuteronomy30:20 and Revelation 20:12) inspired the men gathered to live a responsible and committed Christian life.

He emphasized that God has a purpose for their existence in every location they find themselves and for this reason they ought to live for the Lord. He unequivocally and passionately stated his belief in the Almighty God; saying that: “I pity people who say there is no God. I believe in the existence of God and mindful that the devil is also real. But God is more powerful”. He added that the Christian life cannot be detached from discipline, commitment and service.

Prof. Kumah concluded by stating that the salvation that Jesus Christ offers causes the believer to prosper in this world, however, it is the duty of the Christian to harness and appropriate these blessings.
The Branch Manager of Barclays Bank, Tarkwa, Mr Ebenezer Arko, also appealed to believers to plan, prioritize their needs and also cultivate a saving culture.

He stated that Ghanaians must learn and know the systems of financial institutions to be able to save and invest correctly. He bemoaned the negative attitude of people towards money and advised them to be very careful how they handle, carry and relate to money in this age of technology. “Don’t be greedy. Look after yourself and put smiles on another’s face, “he said.

In his closing remarks, the Pastor Nyarko educated the men on the ministry and mandate of the PIWC concept and the strategic place PEMEM occupies. He said that through the PIWC concept the Church can reach areas and people where traditional churches could not. He was very hopeful that PIWC-Tarkwa would take over Tarkwa for Jesus Christ through the grace of God.