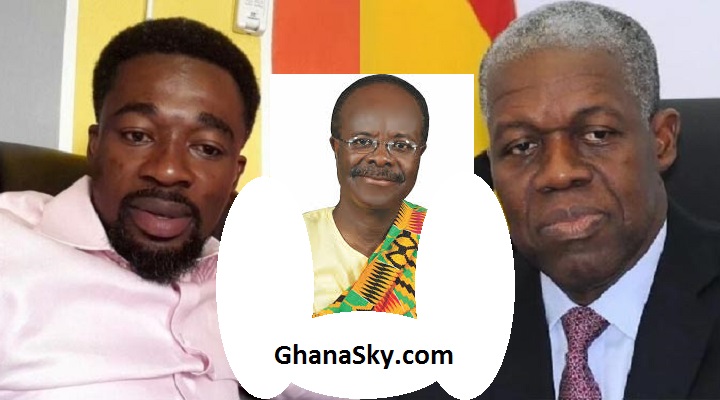 Founder and leader of the Progressive Peoples Party (PPP) and owner of Groupe Nduom, Dr. Papa Kwesi Nduom must be vigilant and intense in his prayers or risk being the next to fall prey to the ‘curse’ that has befallen the Central Region of Ghana, General Overseer of God’s Crown Chapel, Prophet Reindolph Oduro Gyebi (Eagle Prophet) has said.

The prophet who insists that the Central Region was exchanged through fetish means by Former President, Dr. Kwame Nkrumah for his power and prosperity says the land has been cursed for generations after his (Nkrumah’s).

In his words “When Dr. Kwame Nkrumah was taking over Ghana, he didn’t do it ordinarily. It was both a physical and spiritual exercise because for someone to have power, he had to be strong spiritually so the man put in all efforts to have a strong spiritual background and in the process, he had to perform a lot of rituals, most of which he did in the Central Region…. Dr. Kwame Nkrumah performed some rites and planted something in the Central Region. It was a spiritual exchange; Barter and he sacrificed the Central Region as a gift to those helping him in the spiritual exercise. In exchange for power, the lives of great men who arose from that region had to be taken”, he said.

The Eagle Prophet maintained that the rites performed by the Ghana’s first president have made it such that the lives of prominent persons in the region will be taken within specific periods to renew the covenants that were made.

Attributing the sudden death of Former President Paa Kwesi Amissah-Arthur to generational curses from Nkrumah’s era, he stressed the need for people like Dr. Papa Kwesi Nduom to rise up in warfare against such trends so as to avert becoming a prey considering his success and impact in this country.

“Central Region has been batered for Ghana and the rituals involved is what is costing people from there their lives. That is what is taking their lives and so Amissah-Arthur died because of a generational thing, because he had been sold spiritually. They fight you when you are rising to prominence. I hope this message gets to Paa Kwesi Nduom so he rises up and prays because the impact he is having on Ghana is strong and wonderful and when time comes for his to establish his great vision, they’ll want to take his life. No! God help us all, we all want the nation to prosper”, he stated.

“Central Region people should pray and they should not lead their lives just like that. Right now the strong person in that region who is affluent and making it is Dr. Papa Kwesi Nduom and these are some of the things, when you start revealing some of these things, demons realise they are being exposed, they will fight back. These things are hurting the country and if we don’t fight it, sorrow and pain will never depart from the country. Prominent people will always emerge from there but they will always die painfully because of what our forefather, Kwame Nkrumah did”, he continued.

According to him, the symbol of the cock on the logo of his party; the Convention People’s party stemmed from those fetish rites.

“The cock symbol of the CPP represents the spiritual exchange Nkrumah engaged in. The cock is a domestic animal and it doesn’t live long because of the purpose it serves. The male fowl represents an important person and so most of the time it needs the blood of a human to resuscitate it so it lives longer and so this is what will always be happening in the nation. But we need to pray. God bless our homeland Ghana what does it mean? If we continue to dishonor God, we will remain in this state forever. If we don’t break some yokes and pray fervently, all other efforts, social, economic, etc. will not work”, he noted.

He was said to have collapsed during a morning workout at the Airforce Gym where he himself had drove to to exercise. The former vice president was reported to have been rushed to the 37 Military Hospital where he was later pronounced dead.