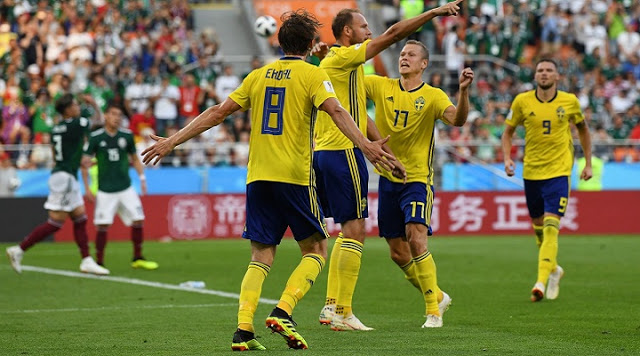 Sweden bounced back from the disappointment of last weekend's last-minute defeat to Germany in emphatic style on Wednesday with a 3-0 victory over Mexico as Janne Andersson's side sealed their progress to the knockout stages as Group F winners.

After finishing the first half goalless, Sweden broke the deadlock five minutes into the second half through full-back Ludwig Augustinsson before captain Andreas Granqvist doubled their lead from the penalty spot just after the hour mark.

Sweden's place in the last 16 was secured after Mexico defender Edson Álvarez put to ball into the back of his own net when the ball bounced off his hand as he tried to clear a cross.

Despite suffering their first defeat of the tournament, Mexico joined Sweden in the knock-out stages after Germany failed to beat South Korea in Kazan as the world champions were eliminated from the World Cup.

Some stats for you