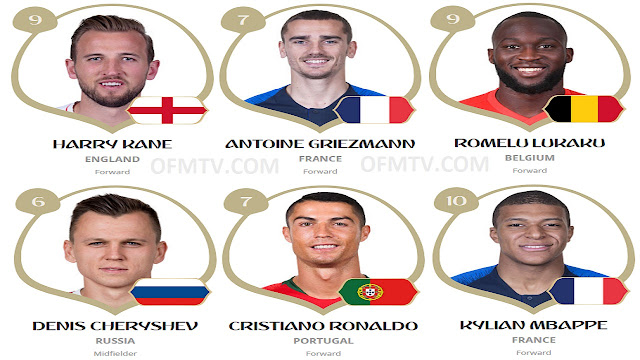 Captain Harry Kane is England’s undoubted talisman, leader and key player. The prolific Tottenham Hotspur man is a forward who can score all types of goals: with both feet, his head, from distance or from inside the six yard box – he has consistently found the net for club and country since bursting into the Spurs first team in the 2014-15 campaign, winning the English Premier League Golden Boot in 2015-16 and 2016-17.

To say then that England are reliant on Kane is a vast understatement. He played a pivotal role on the road to the 2018 FIFA World Cup Russia™, scoring winning goals against Slovenia and Lithuania and a late equaliser against Scotland – those three goals alone accounting for seven qualifying points. Kane will be looking to carry that influence into the finals themselves, and step up to the next level of superstardom by shining at a World Cup.

Antoine Griezmann no longer needs any introduction. Since being nominated as one of three finalists for The Best FIFA Men's Player Award for 2016, the forward has remained consistently effective, as proved by his goal and assist numbers with both Atletico Madrid and France this term.

Not the most powerful player at 5'9'', the Macon native makes up for any frailty with his speed, vision, dribbling acumen and eye for goal, while his left foot can be deadly from set-pieces. For France, he has become a core member of the team, whether on the left up front in a 4-3-3 formation or the second striker in a 4-2-3-1. In either role, Grizou is a vital asset, having often proved decisive for Les Bleus on the road to the 2018 FIFA World Cup Russia™.

The question of who is Belgium’s first-choice striker is one that was posed for several seasons but which finally seems to have found a definitive answer. After top-scoring in the Belgian league at the age of 16 with Anderlecht, Romelu Lukaku has continued to ply his trade to good effect in the English Premier League with West Bromwich Albion, Everton and now Manchester United.
“Big Rom” has power and pace to go with his goalscoring touch, and made an early impact in his international career, scoring twice in a friendly against Russia as a mere 17-year-old. Now the all-time leading goalscorer in the history of Les Diables Rouges, Lukaku has won the football world over with his impressive statistics and drive and determination. A scorer against USA at Brazil 2014, the frontman heads to Russia 2018 in fine form, having struck 11 goals in the qualifiers.

Son of former striker Dmitry Cheryshev, Denis moved to Spain aged six with his father, who had just signed for Sporting Gijon. Denis himself started out at Sporting before following his dad to Burgos CF and eventually getting a chance at Real Madrid’s academy.

Denis rose through the ranks in Madrid, having a particularly successful stint in the ‘B’ team, Real Madrid Castilla. His performances were such that in November 2012, he became the first Russian player to play for Los Merengues in a competitive fixture.

Persistent injuries prevented the winger from nailing down a starting role at the Spanish giants, so he went on loan in search of playing time at Sevilla, Villarreal and then Valencia. In summer 2016, Villarreal decided to bring him back on a permanent basis.

Cheryshev’s debut for Russia came in November 2012 against USA. His experience of playing in one of the strongest leagues in the world will no doubt come in useful for the Sbornaya this summer.

The Real Madrid forward is Portugal’s captain, most capped player and leading all-time goalscorer. Still supremely fit and as committed as ever, he is more of a penalty box operator these days, having lost none of his scoring touch or his gift for breaking records.

A formidable dribbler and a considerable aerial threat, Ronaldo is noted for his power, speed and instinct, qualities that have seen him named as the world’s best player on five occasions by FIFA. The most special of all the many honours he has won, however, is UEFA EURO 2016, his country’s first major trophy, which he had the honour of raising as skipper. The 2018 FIFA World Cup Russia™ will be his fourth world finals appearance.

Befitting his status as the symbol of a new era for French football, Kylian Mbappe was the first player called up by France to be born after their 1998 FIFA World Cup™ win. The forward was already making waves and being showered with plaudits when he got the call, thanks in large part to his superb UEFA Champions League performances for Monaco.

Far from letting the praise go to his head, the thrilling young prodigy continued his rise by joining Paris Saint-Germain, where his statistics have again been remarkable. He has also emerged as an important player for Les Bleus, notching his maiden strike on his fifth appearance, a crucial 4-0 victory against the Netherlands on the road to Russia 2018.

Thanks to his extraordinary bursts of speed, his unpredictability and his intelligence on the pitch, Mbappe is already considered one of world football's finest players, and he will be anxious to underline his standing in Russia.