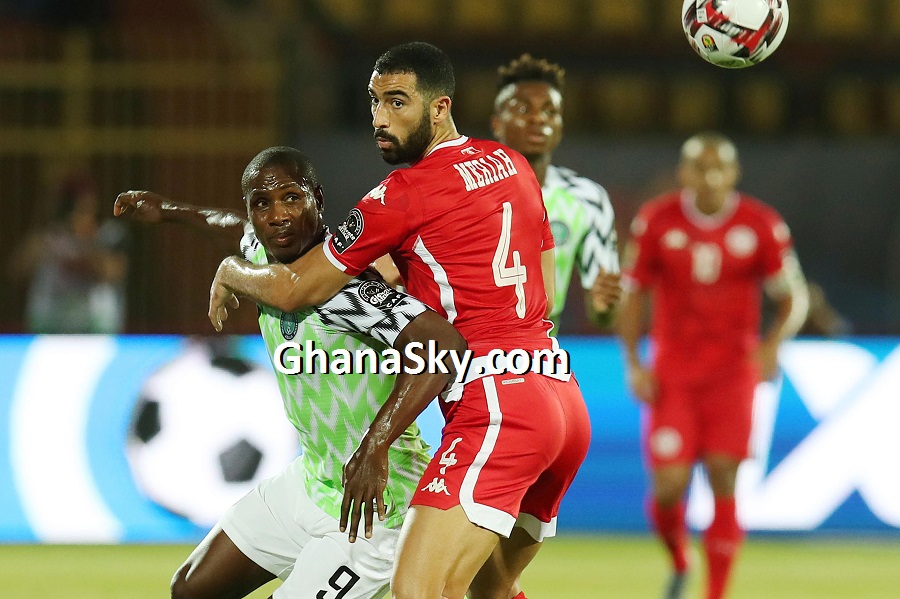 Odion Jude Ighalo of Nigeria challenged by Yassine Merriah of Tunisia during the 2019 Africa Cup of Nations 3rd and 4th Place match between Tunisia and Nigeria at the Al Salam Stadium, Cairo - Egypt.

Odion Ighalo’s second minute goal, his fifth of the tournament, handed Nigeria’s Super Eagles the Total Africa Cup of Nations (AFCON) Egypt 2019 bronze medal after a 1-0 win over Tunisia in a battle of the eagles at the Al Salam Stadium in Cairo on Wednesday night.

This was the eighth time the Super Eagles were playing a third and fourth AFCON play-off and they kept their record of winning the bronze medal match.

Though with a maiden AFCON medal around his neck, it wasn’t a near perfect evening for Ighalo.

Almost reduced to tears, the Chinese based striker limped off the pitch and had to be consoled by his teammates after pulling his hamstring as he raced off a counter and tried to make a pass.

But, he hopes to cling on to the golden boot and hopes that neither of Sadio Mane or Adam Ounas scores a goal in Friday evening’s final as they both trail him by two goals.

Ighalo had netted his fifth goal of the tournament to drift away in the race for the golden boot, two clear ofhis closest challengers Adam Ounas and Sadio Mane.

The Shanghai Shenhua forward stretched his foot to nudge the ball home from a yard out after Tunisia keeper Moez Ben Cherifia and his defender Yassine Meriah both clashed as they threw themselves on the ground to try and cut out Collins Jamilu’s cross from the left.

But that was just about it as much as the Nigerian attack was concerned as the Tunisians took control of the game both in terms of possession and chances created.

In the eighth minute, defender Kenneth Omeruo had to make a brilliant intervention to cut out Taha Khenissi’s shot from the right after he had been sent through by a delightful ball from skipper Wahbi Khazri.

Ferjani Sassi came inches close after 14 minutes, his low effort from the edge of the box after skillfully evading a tackle from Peter Etebo went just wide.

Nigeria were playing too deep in their own half and had let the midfield partnership of Sassi and Joris Skhiri take charge of the tempo.

In the second half, Tunisia started from the same place they left in the first half and came close to a goal just two minutes in when Khazri sent substitute Firas Chaouat through, but the striker hit the side netting facing Francis Uzoho one on one.

On the other end, Chukwueze came close to doubling Nigeria’s advantage when he picked up the ball at the edge of the box but his curling effort was smothered behind for a corner by Ben Chirifia.

With the game advancing and the demanding nature of the tournament taking a toll on the players, the pace of the game drastically dropped with chances few and far in between.

Substitute Samuel Kalu provided some late flashes of brilliance late in the game barely a minute after his introduction with two brilliant freekicks, both of which were saved by Ben Cherifia.