Uganda vs Egypt [0:2] Highlights And Goals, Egypt wins Group A in grand style at AFCON 2019 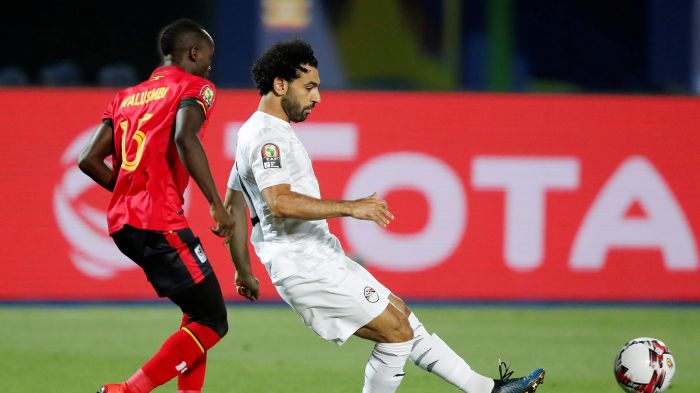 Hosts Egypt ended group A of the 2019 Total Africa Cup of Nations with maximum points after defeating Uganda 2-0 at Cairo International Stadium on Sunday night. The Pharaohs, already qualified before the game guaranteed the group top spot in grand style, winning all three matches of their mini league campaign.

Superstar Mohamed Salah and skipper Ahmed Elmohamady scored in the opening half final 10 minutes to give Egypt victory that guaranteed the top spot for the hosts, who now wait one of the qualified third teams (groups C, D or E) in the next round. Meanwhile Uganda qualified to the round of 16, finishing the group in second place, one point more than DR Congo who defeated Zimbabwe 4-0. The Leopards will now wait to see if they can grab one of the four places for the third placed teams.

Egypt started the match on attacking note, and had the game’s first attempt from Mahmoud Hassan “Trezeguet” who tried to go through Uganda’s defense but couldn’t control the ball.

The tide turned to Uganda’s side from then and Egypt’s goalkeeper Mohamed Elshenawy proved to be Egypt’s man to thank in several occasions.

Emanuel Okwi’s shot was destined to give The Cranes the lead after 13 minutes but found the safe hands of Elshenawy, who once again saved The Pharaohs after 24 minutes.

Egypt was forced to do an early substitution after 24 minutes when forward Ahmed Hassan “Koka” was injured to leave his place to Marwan Mohsen.

Elshenawy once again saved the hosts after 28 minutes when he stopped Allan Kyambadde’s shot from close distance. The same fate was there again three minutes later when Al Ahly goalkeeper deflected Kyambadde’s shot to a corner kick.

And against the run of play, Egypt took the lead after 36 minutes. From a freekick Salah produced his magic once again to give The Pharaohs the lead with Uganda’s goalkeeper and captain Denis Onyango completely beaten.

Two minutes from the break Elshenawy returned to be Egypt’s hero when he stopped Abdo Lumala’s shot. And just before seeing the halftime whistle, Egypt’s captain Elmohamady doubled the hosts lead.

The goal was Elmohamady’s second goal of the campaign, same as Salah.

Uganda started the second half trying to reduce the deficit, but it was Egypt who could have scored the third when Salah went one on one with Onyango but the Ugandan shot stopper had the upper hand.

Farouk Miya could have scored for Uganda after 55 minutes but his shot missed the target.

Uganda had to deal with a huge blow when Onyango was injured and left his place to Robert Odongkara 20 minutes from time.
Both teams looked satisfied with the result and nothing new happened, to see Egypt ending the group with the maximum points, while Uganda reached the knockout stages for the first time since 1978.