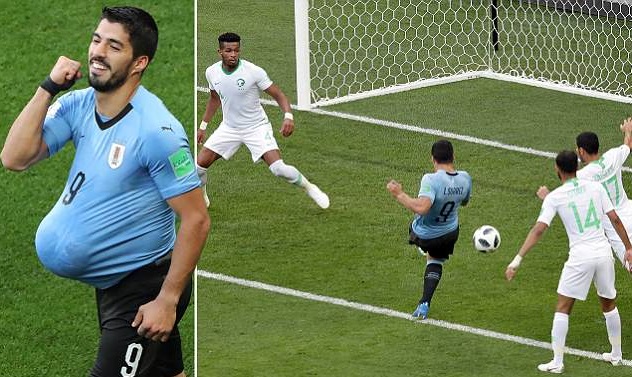 Luis Suarez (L) scores the only goal of the game

Luis Suarez was the beneficiary of another air malfunction for Saudi Arabia as Uruguay became the second team to join hosts Russia in the last 16.

An engine on the plane carrying Saudi Arabia’s squad had caught fire as it came in to land at Rostov’s Platov International Airport ahead of this match.

Fortunately, no one on board came to any harm but that would not prove the end of the team’s troubles in the air.

Only Mohammed Alowais will know what he was trying to achieve as the Saudi Arabia goalkeeper came careering off his line, jumped more in hope than any expectation of catching Carlos Sanchez’s corner and watched as the ball sailed over his head and into the path of Suarez to score what would prove the decisive intervention of a closely fought game.

It was the Barcelona forward’s 52nd goal on his 100th appearance for his country, quelling some of the criticism that greeted his performance against Egypt, and he celebrated by putting the ball up his shirt and sucking his thumb in tribute to his wife, Sofia Balbe, who is thought to be pregnant with their third child.

“I am very pleased to have scored but the main thing was to win to secure progression to the next round,” Suarez said. “We have seen many results at this World Cup that have been rather surprising so are delighted to have got through. But we must still fine-tune a few things as we have not been at our absolute best.”

Uruguay will face Russia in Samara on Monday to determine who tops Group A but if the hosts have breezed unexpectedly through the group, it has been more of a battle for the South Americans. They required a stoppage time goal to beat Egypt and, while largely comfortable here, encountered an obstinate Saudi Arabia side determined to atone for their shambolic 5-0 defeat to Russia that had sparked a national inquest.

By the end, they were left to rue one glaring error which a player of Suarez’s quality was never going to pass on. This was still not vintage Suarez by any means, even if his work rate could not be faulted, but then it was not vintage Uruguay either.

They did enough, and could have scored one or two more, but they found the going tough for the mostpart against a Saudi Arabia team that was far more organised, compact and diligent in their work than they had been during that debacle in Moscow last week. They may be going home but they at least restored some pride.

Shortly after Suarez scored, Saudi almost equalised. Martin Caceras was caught flat-footed and the lively Hatan Bahbri stole in only to direct his half volley over from Yasser Al-Shahrani’s fine cross.

Three of the players, including goalkeeper Abdullah Al-Muaiouf, who had started against Russia were dropped after being rather sinisterly warned they would face “penalties” when they returned home. So Al-Muaiouf was probably mightily relieved in that respect that he was not responsible for the mistake that gifted Suarez a straight-forward finish, although it was a shame for Al-Owais as he otherwise equipped him well and made a fine save late on to deny Edinson Cavani.

It was just not Cavani’s day. He stroked over a fine cross for Sanchez just after the hour mark that should have resulted in a goal but the Uruguay midfielder, who had made a lung-busting 50 yard dash into the box, got under the ball and headed over. Yet otherwise Cavani was well-shackled by a Saudi Arabia defence unrecognisable from the one that had been blown apart by Russia.

Neither Cavani nor Suarez have yet to really hit their stride in this tournament. Yet Suarez ran himself into the ground and the goal will do a lot for his confidence.

“Luis fought hard and has special traits that he’s showcased at all his clubs,” Oscar Tabarez, the Uruguay coach, said. “He always shows his character and responsibility and takes on that pressure and lives with it all the time. He is fundamental to us, he always gives hope to the team and has an enormous capacity to score goals.”