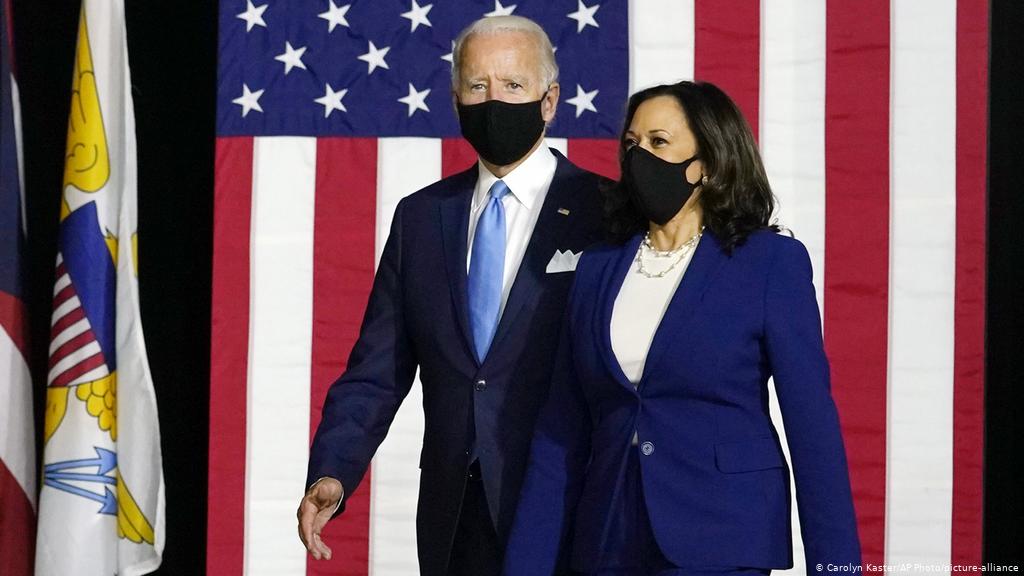 US President-elect Joe Biden is to make tackling the corona-virus pandemic his top priority following his win over Donald Trump, his team says.

Announcing the first steps in his transition plan, his team said there would be more testing and Americans would be asked to wear masks.

He will also focus on the economy, tackling racism and climate change.

Mr Trump has yet to concede and Mr Biden's win remains a projection as key states are still counting votes.

However the Democrat is forging ahead with his plans for assuming power in January after major US networks called the election in his favour on Saturday.

That reportedly also includes a slew of executive orders - written orders issued by the president to the federal government that do not require congressional approval - aimed at reversing controversial Trump policies. According to US media:

In his first speech as president-elect on Saturday, Mr Biden said it was "time to heal" the US and vowed "not to divide but to unify" the country. Addressing Trump supporters directly, he said: "We have to stop treating our opponents as enemies."

@KamalaHarris said @JoeBiden is a healer, a uniter, a tested, and steady hand. A person whose own experience of loss gives him a sense of purpose that will help us, as a nation, reclaim our own sense of purpose.

He and Vice-President-elect Kamala Harris have launched a website for the transition.

The projected election result means Mr Trump becomes the first one-term president since the 1990s. The Republican president's campaign has filed a barrage of lawsuits in various states but election officials say there is no evidence that the vote was rigged against him, as he has said.

In another development, former Republican President George W Bush congratulated Mr Biden on his election victory, saying the American people could have confidence that the election had been fundamentally fair and that its outcome was clear.

He also congratulated Mr Trump on a hard-fought campaign.

The president-elect is vowing a major shift in the way the White House approaches coronavirus after Mr Trump repeatedly downplayed its gravity and resisted public health measures including wearing masks and social distancing. 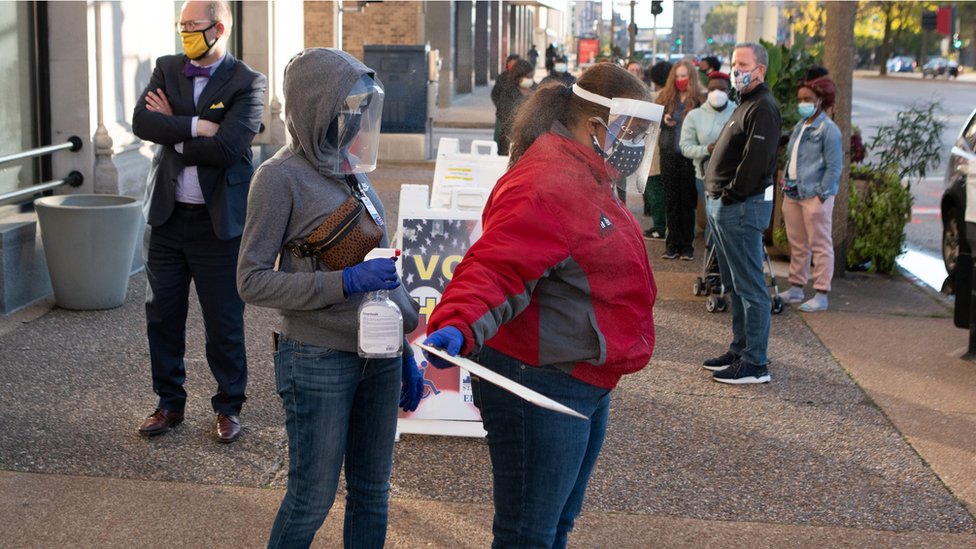 The US election took place in the shadow of the virus, which has killed more than 237,000 people in the country

The Biden team said it would ensure all Americans had access to regular and free testing and provide "clear, consistent, evidence-based guidance" to communities.

Mr Biden also wants rules mandating the wearing of masks across the country, which he says would save thousands of lives. He plans to call on every American to wear a mask when they are around people outside their own household and wants state governors and local authorities to make this obligatory.

The president-elect has regularly appeared in public wearing a mask while Mr Trump has largely avoided doing so.

US cases rose by more than 125,000 on Saturday for the third day in a row and deaths exceeded 1,000 for the fifth day in a row. More than 237,000 people have died. Earlier this month top US virus expert Dr Anthony Fauci said the US "could not possibly be positioned more poorly" as the country approached winter and people spent more time congregating indoors.

How will he tackle 'systemic racism'?

In another break with the Trump era - which saw Mr Trump accused of stoking of racial tensions and failing to condemn white supremacist groups - Mr Biden aims to make addressing racism a central pillar of his administration.

He wants measures including better access to affordable housing for black and minority communities, fair treatment and pay for workers and enabling the Federal Reserve - the US central bank, which sets monetary policy - to do more to reduce racial wealth disparities.

Mr Biden also wants to transform US policing by banning the use of chokeholds that have been involved in high-profile deaths at the hands of police, stopping the transfer of "weapons of war" to police forces and creating a national police oversight commission.

He further plans to reduce the US prison population, which at more than two million people is the biggest in the world and includes a disproportionate number of black and minority inmates, and focus more on "redemption and rehabilitation".

"Our criminal justice system cannot be just unless we root out the racial, gender, and income-based disparities in the system," his plan says.

The US has been roiled by protests against police brutality in the run-up to the election. Footage of the death of George Floyd in police custody in Minneapolis in May sparked outrage around the world. The US election exit poll showed that racial inequality was the second-biggest factor determining how people voted after the economy.

Trump 'not planning to concede'

The BBC projected Mr Biden's victory on Saturday after gains in the key battlegrounds of Pennsylvania and Nevada propelled him over the 270 electoral college vote threshold required to clinch the White House.

Mr Trump has not spoken in public since the numbers were announced, but he has repeated previous claims of voter fraud in tweets, which Twitter soon marked as a "disputed" claim. The Trump campaign has indicated their candidate does not plan to concede. 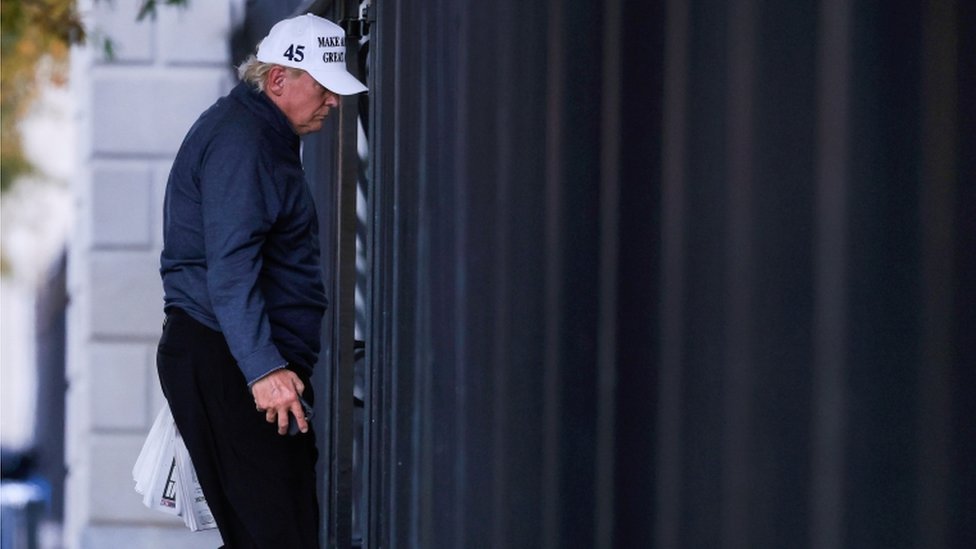 After Mr Biden was projected to win Mr Trump remained defiant, saying Mr Biden was "falsely posing as the winner" and insisting the election was "far from over". The president took more than 70 million votes, the second-highest tally in history.

Mr Trump has vowed to contest the election results on several fronts. A recount will be held in Georgia, where the margins are tight, and Mr Trump wants the same in Wisconsin. He has also vowed to take legal action to the Supreme Court, alleging voting fraud without evidence.

If the election result is challenged, it would require legal teams to challenge this in the state courts. State judges would then need to uphold the challenge and order a recount, and Supreme Court justices could then be asked to overturn a ruling.

On Saturday, the Trump campaign filed a lawsuit over ballots cast on election day in Arizona that it claims were incorrectly rejected. Arizona's secretary of state, however, said in a statement that the case was "grasping at straws".

Meanwhile, votes in some states are continuing to be counted and results are never official until final certification, which occurs in each state in the weeks following the election.

This must be done before 538 chosen officials (electors) from the Electoral College - which officially decides who wins the election - meet in their state capitals to vote on 14 December.

The electors' votes usually mirror the popular vote in each state. However, in some states this is not a formal requirement.

The new president is officially sworn into office on 20 January after a transition period to give them time to appoint cabinet ministers and make plans.

The handover of power takes place at a ceremony known as the inauguration, which is held on the steps of the Capitol building in Washington DC. After the ceremony, the new president makes their way to the White House to begin their four-year term in office.