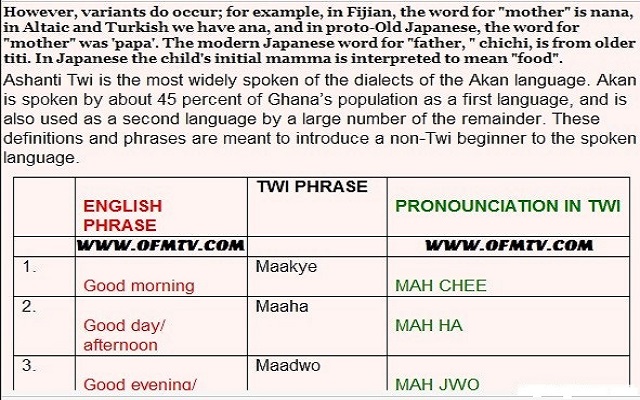 Twi (pronounced 'ch-wee' [ʨʷi]) specifically Ashanti Twi is a language spoken in Ghana by about 8 million people. It is one of the three dialects of the Akan language, the others being Akuapem Twi , Kwahu Twi, Fante Twi etc which in turn belongs to the AKAN language family. Within Ghana, Twi is spoken in the Ashanti Region and in parts of the Eastern, Western, Central, Volta and Brong Ahafo Region. There are many divisions of twi languages, but they are all mutually intelligible.

Akan Abusua:
The Akan believe that man is made up of soul (okra), spirit (sunsum),
blood (mogya) and family (abusua). The blood which comes from the mother
determines the abusua or family group in Ashanti but from other Akan
group it is the opposite. Since most Akan`s are matrilineal,
a child is what his/her mother is. Therefore a person can be Asante only
by virtue of the fact that his/her mother is Asante. The eight Akan
abusua are Aduana, Agona, Asakyiri, Asenie, Asona, Bretuo, Ekuona and
Oyoko. It is said that generally, more people belong to the Asona abusua
than to any other family group. The smallest of the abusua is Asakyiri.

Abusua is not the same as clan. Whereas abusua means (or is) a group or
groups of people descended from one great-grand-mother on the maternal
side, clan is a federation of four or five different groups of abusua or
families with one recognised head.

Twi (pronounced 'ch-wee' [ʨʷi]) specifically Ashanti Twi is a language spoken in Ghana by about 8 million people. It is one of the three dialects of the Akan language, the others being Akuapem Twi , Kwahu Twi, Fante Twi etc which in turn belongs to the AKAN language family. Within Ghana, Twi is spoken in the Ashanti Region and in parts of the Eastern, Western, Central, Volta and Brong Ahafo Region. There are many divisions of the Twi languages, but they are all mutually intelligible.
They are all tonal language like the word 'PAPA', which means many things in different places in Ghana and even in other countries.

PAPA can mean any of the following's in Ghana:

Ashanti Twi is the most widely spoken of the dialects of the Akan language. Akan is spoken by about 45 percent of Ghana’s population as a first language, and is also used as a second language by a large number of the remainder. These definitions and phrases are meant to introduce a non-Twi beginner to the spoken language.

Twi Family & Culture Dictionary:
NB: The ideas, customs, and social behaviour of a particular Akan-Twi people in a society.

Examples of Taboos - Eyirwodea
1. The Akan-Twi people have a notion that one should not shout on top of one's voice
when mentioning somebody's name in the night. It is believed that ghosts and
other spirits might hear the name and can spiritually manipulate them. The
moral lesson is actually to stop people from making noise or cause
unnecessary distraction in the night.

2. It is also believed that, one should not sing whiles bathing. It is said
that one who fall prey to this act will die. The prime aim was to prevent
lather and other chemicals from entering one's mouth while bathing.

Cha Cha – Gambling
Chaley – A term casually used to call a friend. Similar to “Hey Dude, Hello
Mate, What’sup Bro”
Chisel - A miser or stingy person.
Chobo – Money taken from a given total through deliberate miss-accounting o.
E.g. The money stolen from the cashier by the shop assistant, without the shop
owners knowledge, is chobo.

Dropping – Privately Chartering a taxi. Note: Most Ghanaian taxis are run buses;
They follow routes and thus many individuals can get into one taxi heading to a
single destination. If you want to deviate from the drivers route, you have to
take a dropping.

Sakora – A hair style involving shaving all hair off, like a Shaolin.
Shashee – A promiscuous woman. Not to be confused with Ashawo. which is a
prostitute
Shegelege – Commotion or Chaos
Skin Pain – A person not happy about other peoples successes. A hater.
Skin Tight - Tights, leggings or leotard.

Vamoose – Go away.
Vim – An expression for descibing power, passion or enthusiasm. E.g. More vim –
More Passion.
Yawa - A description for something fake or disgraceful. E.g. ’She is yawa’.

Yoomo - A type of hair dye.