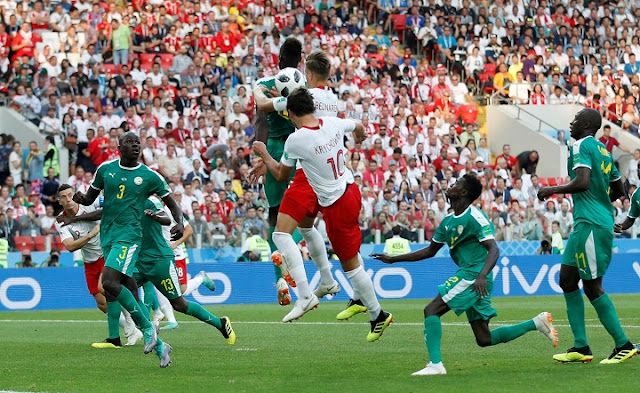 According to report reaching GhanaSky.com through indian express, first round of FIFA World Cup 2018 in Russia after beating their opponenets 2-1 on Tuesday at Spartak Stadium. Senegal took the lead after a clumsy own-goal by Thiago Cionek in the first half.

M’Baye Niang doubled the lead for the African side in the second half as Poland keeper Wojciech Szczesny decided to race out to save the long pass. But Niang edged past him to slot home in an empty net. Poland scored the only goal in the dying minutes of the game as Grzegorz Krychowiak sent a header past the Senegal keeper. The result leaves Senegal level with Japan in Group H.

Poland defender Thiago Cionek stuck out a leg and deflected Idrissa Gueye's wayward shot into the net in the 37th minute before goalkeeper Wojciech Szczesny rushed recklessly out of his area and allowed M'Baye Niang to nip in and score into an empty net on the hour.

Szczesny may have been caught out because Niang was having treatment on the touchline and re-entered the pitch as the ball was played backwards to the Poland goalkeeper by Grzegorz Krychowiak.

The win took Senegal top of Group H with three points, along with Japan who also beat Colombia by the same score. Colombia and Poland are both without a point.

It was a relief for Africa after Egypt, Morocco, Nigeria and Tunisia all lost their opening games.

The first half hour was a sorry affair strewn with misplaced passes from both sides and neither of the danger men, Lewandowski and Senegal's Sadio Mane, saw much of the ball.

The first shot on target produced the first goal as Senegal went ahead in the 37th minute.

Niang won a challenge with Lukasz Piszczek, burst down the left and found Mane who in turn slipped the ball to Gueye. The midfielder's shot appeared to be going wide until the hapless Cionek stuck out a leg and deflected it past Szczesny.

Lewandowski sprang into life five minutes after halftime as he won possession, burst clear and was up-ended by Salif Sane. He took the free kick himself and although he managed Poland's first shot on target, it was saved by Khadim N'Diaye.

Poland appeared to be coming back into the game until the most embarrassing moment of the World Cup so far.

Niang had picked up a knock and gone to the sidelines for treatment, and the referee and fourth official allowed him to return to play just as Krychowiak tried to pass the ball back to his goalkeeper. Szczesny rushed out of his area to collect the pass but Niang stole in to score to Polish disbelief.

Krychowiak partially made amends with his goal but it was too late for the disappointing Poles.

Poland have now gone six successive World Cups without scoring in their opening match and last won one in 1974.